[Voices from Japan] No.18: Economic Insecurity of Women and the Systemization of Anxiety 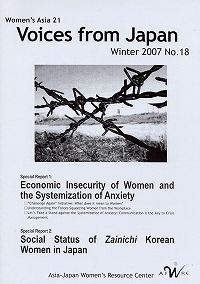 Economic Insecurity of Women and the Systemization of Anxiety

“Challenge Again” Initiative: What does it mean to Women?
Impoverishment of Women and “Challenge Again” Initiative
Understanding the Forces Squeezing Women from the Workplace
Single Mothers Urged to Become Financially “Independent”
Community Funding: Financing Loans for Women in Business
“Public Security” Becomes Individuals’ Own Responsibility
Escalation of Security Measures in Schools
Evicting the Homeless is not the Solution
Let’s Take a Stand against the Systemization of Anxiety: Communication is the Key to Crisis Management
Domestic Violence: Victims and Their Partners
Effect of Counterterrorism and Public Safety Control on “Illegal” Immigration

News in Japan
Two Years since the Adoption of the “Action Plan to Combat Trafficking in Persons”
Historical Verdict on the Distortion of TV Program on Women’s Tribunal on “Comfort Women”
Health Minister Criticized for Calling Women “Child Machines”
Saitama Gov. Criticized Reference to “Comfort Women” in Exhibit