【Voices from Japan】No.31 New Poverty afflicting Women ― In the Enhancement of Policy of the “New Ie (Family) System” 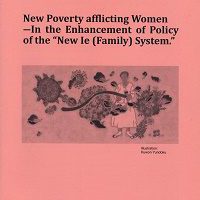 FEATURE:New Poverty afflicting Women ― In the Enhancement of Policy of the “New Ie (Family) System

Opening note for this special edition
By Mieko Takenobu

Hidden Poverty of Women Living with Their Parents:Case Examples of Young Single Women
By Yuko Iijima

Suraj Case: The State’s Responsibility was Not Recognized by the Tokyo High Court

Libel against Daughter of Takashi Uemura ― In the Ruling by the Tokyo District Court, She Won the Lawsuit

Symposium Commemorating the 20th Anniversary of the Foundation of the Asia-Japan Women’s Resource Center: “Peacebuilding in East Asia ― Networking by Feminists”

Gender Café
Give it some Thought: Taking a Cue from the Election in Summer 2016 ― What does “Family” mean to you?